I have stuff. Lots of it. I really like stuff.

I have a particular fondness for books, which I don’t actually consider to be “stuff”, but which for my purposes here today can fit the category in a pinch.  I have spent most of my life not having enough shelf space for my books. They are piled on tables, on stairs, beside my bed… they’re everywhere. I can’t think of a room in my house that isn’t somehow housing at least a book or two. Mr. 761, on his last leave home, very kindly built for me another bookshelf — this one a built in, floor-to-ceiling in our bedroom. I have been meaning to write about it but wanted to wait until I’d primed and painted it, and populated it with books.

That’s taking too long (it’s too damn hot to paint, and I’ve been busy… I have it planned for this week though, really I do) so here are some photos of the shelves-in-progress: 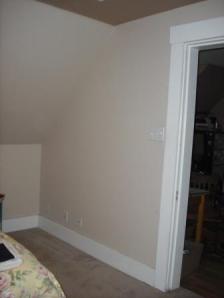 Before: Dumb wall, doing nothing to make itself useful 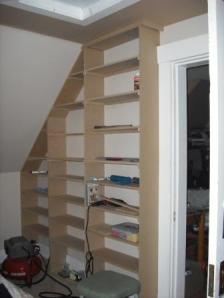 The “After” image is forthcoming…. I just have to prime/paint/fill.

I used to watch a television show about decorating, whose “hook” was that the friendly australian host/psychiatrist would talk the home owner into getting rid of most of their stuff…. it was always “cleansing” and “healthy”. I get that having too much stuff can tie you down, and it can paralyse you (hey, I watch Hoarders) and can in fact be a sickness. However, what bothered me about that show was that the supercilious host (who had no real training as a therapist, I’m betting) would have them throw out things that I tend to think are important… photos, old books, objects that had sentimental value (scoffing at that — as if sentiment is somehow suspect).

Just what the heck is wrong with keeping something because it’s meaningful? I actually 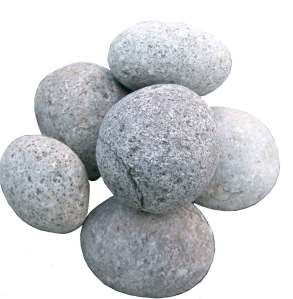 have rocks that I’ve kept, because they have meaning to me. I like objects, and I like to attach meaning to them. As long as I have room for them (thank you for the shelves, honey), I think it’s okay.

I think about when my mother died, and how we three kids sat around, telling stories for days about her “stuff”…. we didn’t know how to divide it up, or how to ask for it, so we devised a fairly simple “game” — we each in turn would state the object we would like to have, and why…. the stories made us laugh and cry and really think about her. She was in those things. It was a lovely experience, such as it was, and the only thing that someone else “got” that I was sad about was her cookbook, which my brother took, quite rightly too now that I think about it. Each of those things — a cookbook, a painting, a set of coasters — wasn’t particularly valuable or fashionable, but they held deep meaning for us. Each time we told a story,  we strengthened our understanding of the woman we loved, and of the very different, though shared, relationships we’d all had with her.

When I’m at my brother’s or sister’s house, I see that my mother is there too — in that table, or those books on the shelf, or in the cookbook, still on the shelf there. That’s priceless, to me. I have objects that my kids know the provenance of (this was grandma’s, and I have it now because it was always special to me for x reason…), and I will leave them those things when I leave the earth. I do hope that no upstart decorator tells them to throw it out because it doesn’t match the decor! These things are the ephemera of history… they may just look like decorative/shabby stuff, but they’re important. 200 years from now, they might find my mother’s hen-shaped candy dish and put it in a museum. Who knows? They might titter over it’s silliness, but they’ll probably also hold it and realize that someone handed candy to her children  out of it, and that her littlest liked it because when the sun glinted off it, it looked like amber.

See what I mean? I know my world wouldn’t end if every single last bit of stuff I have burned up tomorrow, but I hope it doesn’t. I’m the curator of this crazy museum, and I like having it around.

I also like the hunt for stuff. It’s not all “heirloom” pieces like the aforementioned hen-shaped candy dish. Some of it is other people’s stuff that I rescue.  On our recent trip I showed admirable self-control and really didn’t acquire much. One thing that I did get, though, was this lovely thing: 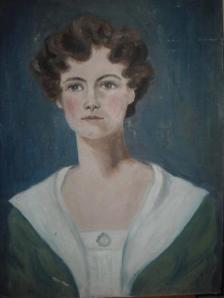 How wonderful is she? It was languishing in a  Vermont junk shop, in front of a mass produced “psychedelic” print and behind something else (a sad eyed clown? A big eyed ballerina?) AND she was mine, for FIVE DOLLARS.

Think about it. Some perfectly adequate painter named Elaine Grover painted this in 1935, and now 75 years later — an entire lifetime — it’s sitting in a junk store? How awful.

Perhaps it wasn’t a good likeness. The lack of a frame suggests that it was either never framed, or it was removed from a frame at some point. I feel sorry for Elaine, really I do (I Googled her, by the way — found nothing).

So, she’s come to live with me. I’m going to get her framed, and put her up with my other family portraits (well, some aren’t really family, but I like the look of them, and so have adopted them to the wall anyway).  I like the look of her, and have decided to call her Elaine (perhaps it’s a self-portrait?). 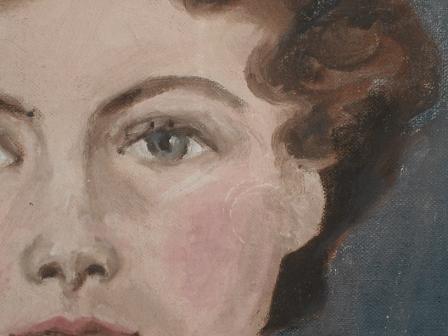 What has she seen, these past 75 years?

I didn’t mean to turn this into a rant, I really didn’t. I actually had intended on making it the first of a series of “Finds” — everything has a story, and if it doesn’t tell me the story, I make it up. I have photos of other finds — today, for example, I got 16 Granta magazines for 50 cents each! Can’t wait to read them, and they are pleasing to me — the design is pretty, and I like the trim size, the graphics, etc. On our last trip I also found a nifty little oil landscape, again adequately painted, but sort of folk-arty and I liked it. I was going to tell you about the junk store we wandered through in Lucan ON — fabulous place, and full to the rafters with STUFF, where we also got a line on tickets for the Lion’s Club draw for Mr. 761’s dream car. The store even smelled right, and the owner was right out of central casting.

I like it when I clean out the clutter in my space, but I don’t think my mother’s duck figurines are clutter. They are family memories. I can have those without the ducks, but I like for the ducks to be around nonetheless. I don’t want to sanitize my environment and remove my history  from it. Life can be messy and cluttered and I think it’s important that we learn to live with a little of each generation’s flotsam. It may not be decorator-ready, but when I look around, I see my life, tied to my mothers’ (yes, I have two or three), to my father’s, to my children.

I’m the conduit that brings my parents to my kids, and shows them that they’re part of a line, members of a tribe. They may not want to keep that candy dish, and that’s fine, but they have absorbed – I think — why I like it.

Let’s just hope it doesn’t go for $5 in a junk store someday.