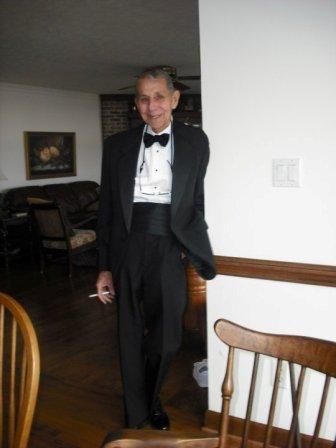 Today is my father’s 78th Birthday. Terrorists sort of ruined the date for him, in a way — he gets much less joy out of his day now. I understand that completely. It isn’t something as silly as it being “ruined” for cake and presents; it’s about a loss of trust in the way things work in the world. I remember, on that horrific day in 2001, talking to him and hearing such loss in his voice. Loss of trust in the sanctity of our borders, and a sense that the world would never be quite the same. I hate that it happened, and hate that it’s now somehow linked with him, and his day.

I remember puttering around the house that morning, and a friend called me out of the blue — I remember saying her name cheerily, pleased that she’d called. She told me to turn on the television, and then hung up. I turned it on, and well, you know what I saw. We all saw it, watched in horror and fear and disbelief. I don’t think I turned the tv off for weeks — I couldn’t stop watching. I sat there so much I started to knit scarves — to keep my hands busy while I watched. Many family members received “9/11 Scarves” that Christmas.

Dad is from a pretty lucky generation. He was too young for WWII (and medically exempt for Korea), He was able to reap the benefits of his demographic and to avoid military action. He worked hard, and was smart and charming — he went far in business and had a very successful career. He traveled, lived overseas, and was able to provide for his family very well. He’s had two long marriages, and is Grandpa Lee to 7 kids. He’s patriotic, a Republican, and really believes in the American dream. Hell, he is the American dream. He came from humble beginnings and made good, the old-fashioned way through hard work, luck, and by harnessing the power of compound interest.

That’s maybe why it’s especially hard to have 11 September tainted, somehow. He grew up in the shadow of WWII and was no doubt partly formed by that fight — by the understanding that the USA was Protector of the World. It’s culturally encoded — the US of A was Right, and Good, and above all else, Safe.

9/11 was a violation of that safety. It was horrific and violent and unmoored us all. It changed the world, instantly, and in a long-lasting way. We’re still feeling the fallout from it now, almost a decade later.

He turned 69 that day. A good age, and one that should have been a day of celebration and family and gifts — instead he now identifies it at least partly with terrorism and unspeakable grief. Now, almost a decade later, we are at least also able to identify it with acts of great courage, and hope, and strength. The way that Americans dealt with the horror was inspiring — a million stories of everyday moments of heroism and bravery; strength in adversity, and some happy endings.

In the 9 years since that birthday, he has undergone his own baptism by fire; his own horror. A year after the event, he was feeling poorly, a year after that he was diagnosed with gastric and esophageal cancer. He went through it all like a champ — surgery and ICU, chemotherapy, radiation, a feeding tube, extreme weight loss… the whole horrible heart-breaking cycle of diagnosis through to recovery. He is now a 6-year cancer survivor — a survivor of a type of cancer that has a very low survival rate. He really is miraculous. He had a lot in his favor — they caught it early and he had tremendously talented doctors, he has a wife who was tireless in her support of him, loving family, and an extended family of friends/church group/neighbors who offered drives, food, respite and support.

Today, on his 78th birthday (wow!) I am in awe of what the past decade held for him, and so pleased that he came through it all in such fine form. He’s still too darn skinny for my liking, and he smokes way too much (please quit, Dad) but he’s strong as an ox, whip-strong, and he’s still here.

He survived it all, and came through it — not entirely unscathed, but not broken either. His mettle was tested and I am of the opinion that he is a true hero. It wasn’t a battle on the scale of 9/11, but it was his battle against a terrorist, a terrorist that violated the sanctity of his person.

Happy Birthday to you Dad. I know you don’t much like the day any more, but maybe if you try to think about it as a reminder that you are a survivor it will help you to reshape it. This day can be a reminder to you of strength and courage, and fighting successfully in the face of great odds. I’m glad your birthday is on this day, and I’m very glad that you’re here to celebrate it.