I went on a little vacation to New England last week, and when I got home it felt like all hell had broken loose in the Canadian literary scene. Incidentally, I was in a great bookstore in Portland ME

called Longfellow Books and was very happy to see quite a few Canadian-authored books there. Beautiful store that bills itself as “a fiercely independent community bookstore”. Too bad most of the Canadian books were second-hand — I’d love to see the authors get recompensed for their work, but am happy at least that they are leaking over the border and perhaps gaining audience in the States.

It has been an interesting time for Canadian literature — the Canada Reads thingy ended and the Top Ten were chosen. All great books, I’m sure (still have to read a few) but I still harbor some serious reservations about the way the whole thing happened. I was on the CBC Canada Reads blog today, reading the most recent prattling from the producer and I just can’t get past some of the commentary. She came up with a Top Ten list of “Goodies” that came out of Canada Reads 2011, and number 10 was

The Canada Reads Top 40 authors are adorable. They’ve forged friendships on Twitter, have retweeted each other, recommended each other’s books. It’s a fantastic, vibrant and unexpected conversation that popped up, and we’re thrilled by it. Canada Reads brings people together. They shared headstand tips, baking tips, and invited each other to lobster boils. It makes me sad that on Tuesday, there will only be 10.

That’s what they’re all aiming for. When they sat, alone with their thoughts and were deep in the process of birthing a novel, they were hoping that someday the producer of Canada Reads 2011 would call them adorable because they tweeted-for-their-lives while simultaneously trying to keep their dignity during the Canada Reads Hunger Games. I have no doubt that some of what she writes is true — it did bring some people together. I made quite a few new Twitter-friends in part because of my commentary on this, and am very happy about that. This has certainly opened up some dialogue about the state of the written word in Canada.

What it didn’t do, though, is offer those authors any real dignity. Thank goodness, as a group, they rose to this ridiculous challenge and all managed to retain the dignity they came to it with. One blogger cited a comment from the Canada Reads website, which said:

“I’m usually not one to eat crow, but I was wrong when I snarked at the “self-promoters”. I’ve had a chance over many hours to follow their tweets and visit their websites and I’ve discovered a whole lot of grace and creativity, as well as support for their fellow artists (from Angie Abdou’s video in support of Steven Heighton’s Every Lost Country to Leo McKay’s reason #17 for voting for his book). I hang my head and say I am sorry.”

My only issue here is that the grace exhibited was not because of the circumstances, but in spite of them.

So, congratulations to those Ten who made the short list (a special holla to Ami McKay, who lives close by). 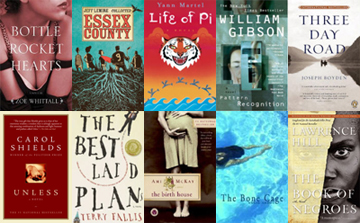 And congratulations to those Top 40-ers too. I have a plan, and will be (re)reading all 40 of those long-listed, but it might take a while. I gave up reading them in order — just too structured for me. Next up for me is Leo McJay Jr.’s book, Twenty-Six. Thank you for your videos Leo, and thank you for your wit.

I’m also planning on not listening in to the Canada Reads Battle in February. I’m going to try to stay away, but I’m not sure if I’ll be able to do it. Right now, just reading their frigging blog is making me feel kind of queasy.

Speaking of feeling queasy, how about that Giller prize? 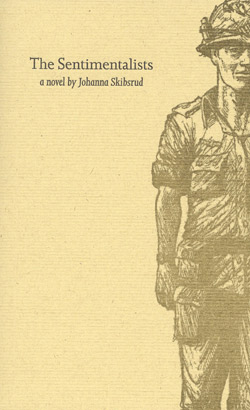 I have to say, I’m a bit bemused by the controversy. It has been fascinating to watch the past few days. Johanna Skibsrud’s first novel The Sentimentalists (Gaspereau Press) has made a splash for a few reasons — it won the Giller Prize, and her publisher will not be able to provide a large print run for that post-prize frenzy of book buying Canadians generally indulge in. And it’s a big frenzy — when a “bestseller” in Canada generally means 5000 copies, the Giller win can boost those sales up to 70- or 75,000 copies. That’s a big boost.

There are a lot of reasons for this whole situation being problematic. Gaspereau is known for crafting objects of beauty; objects that take time and care to create. They are hand-produced, and lovely. There was an original print run of 800 copies, and they are very scarce now. You cannot expect to find many hard copies around, and while they are taking orders, they can produce (at best) a 1000 copies a week. Even that seems ambitious, frankly. Gaspereau Press plans to concentrate on fulfilling the orders of independent bookstores first, rather than those of “big box” stores.

I bought an e-book version on Kobo. I was happy to see it, hadn’t

really expected to find it in e-version, but on a whim typed it in on my iPad and 30 seconds and $9.99 later, I owned the book.

The artisanal copy costs $27.95 and you can order it online, but only through paypal or a personal cheque. There’s a fairly complicated procedure where you email them the information — which book you want, etc., and then the email connected to your Paypal. you can’t pay from Paypal directly. You cannot use a credit card. Their online retail page is here. There is no information on their site regarding how long it will take to receive a copy of this book. I would imagine that they are in a bit of a shock.

I want to make it clear that I respect Gaspereau Press very much. I have visited the press before, and own several of their very lovely books. I get that their commitment is to creating a piece of art. Jack Illingworth, in an excellent article in the National Post, wrote

“This may seem like willful eccentricity on the part of Andrew Steeves and Gary Dunfield, Gaspereau’s co-publishers. It’s actually something much more interesting: a commitment to a thoughtful, rigorous, refined mode of publishing. While publishing is usually discussed as a business, or an industry, all of the finest small press publishers practice it as an art form. The books that they choose to publish aren’t chosen to fill out a season with a handful of products that stand a reasonable chance of selling. Their lists are cultural projects, embodying a few individuals’ ideas of what literature can be.”

He goes on to say that “Gaspereau, and the handful of other companies that operate in a similar way, take this conceit to its logical extreme: both the process through which their books are made, and the physical objects that result, are inextricable from their editorial objectives.”

“Conceit” is a fun word here, because I think we can use it both ways. I get that they do things a certain way and that they have a Philosophy here. I wonder, though, what the Author thinks of this? I know authors. It’s hard to be one. It’s often lonely, and it’s not exactly well-paying, right? So here’s this young woman — a success artistically with poetry and short stories under her belt and now a novel that wins the freaking Giller and they can’t meet demand. Not only that, they won’t meet demand. The refuse to create anything other than an artisanal product. And when they do make more, they’ll service Independent bookstores first. And if you order it online you have to write a cheque and mail it to them?

I’d bet that to the Author this book is a book regardless of its form. It’s her book and she’s been awarded a very prestigious award for it, but now her publishers can’t/won’t produce the things, not in any way that would get this book, her creation, into the hands of people who will exchange money for the pleasure of reading it.

I’m kind of shocked that I could get an electronic version of this book. I don’t know how that stuff works really — I left publishing before electronic/digital rights were involved in any contracts I worked with. One of my peeves is that I can’t find e-books of Canadian authors — not half as often as I would like. I read books, all kinds of books — hard copy, e-book, sometimes both versions of the same title. Whatever.

It feels like Gaspereau (who I really like, really I do) is confusing their role here with hers. They are bookmakers. They make books and they are artists at it. She writes books. While the form and the function may be inextricably linked within the rarified air of Gaspereau, we here in the cheap seats still think it’s a work of art, even if it’s printed off my HP inkjet. Even if it’s written in crayon on a paper bag. Even if it’s an ebook.

All of those things are the art, at least the art that matters at this point, to the author who created it. It is her publisher’s job to make sure that this art is disseminated.

Over the past two days since she won, there has been a lot of commentary on this. I’ve been surfing it, and it feels like it’s getting bigger. It feels like it’s turning a bit icky in some ways… I’ve read some very derisive blogs about Gaspereau Press (hey,  they can do what they want, right? I might not agree, but they are ideologues, and I love idealogues — you always know where they stand), and even a few comments about how it doesn’t really “matter” if Skibsrud loses some sales because she’s won that big prize and has a fat advance from a UK publisher (um, prizes are taxable — I think — and advances are just that – an advance, like, a loan). That she’d be “fine” regardless.

I’m not going to get into that debate. I’m just speaking now about my initial impressions. I haven’t even finished the book, and at the moment I’m not entirely sure I like it. I think that it needed more editing. More on that later, I guess, but here’s a review that says  pretty well how I feel about it right now. When I finish the book, maybe I’ll feel differently, I dunno. None of that matters. If I’d been able to go out and buy the artisanal copy, I probably would   have bought two copies on spec (one for me, one for a gift). As it is, I bought an e-book for around ten bucks and saved myself $45.91.

How many other people did the same, or can’t buy the e-book because they don’t have the technology? How many people do you think will buy this book later, in an independent bookstore when it finally becomes available? How many people are going to mail a cheque or send an email with Paypal info? Ugh.

I think quite a few people just won’t buy either version, and it seems that the “conceit” mentioned earlier might be one that costs the author more than she bargained for. Gaspereau Press can live with the concessions they’ve made to their Art, but did Johanna Skibsrud choose to make those same concessions?

My congratulations to Ms. Skibsrud on her win.

6 thoughts on “A little green around the, er, Gillers”