A while back (in 2010, though it hardly seems possible that much time has passed) I wrote a post about sisters. It was about my daughters as sisters, my nieces as sisters, and about me and my sister.

Tomorrow is my smart, funny, beautiful sister’s birthday, and I’ve been thinking of her all day. I pretty much said all I needed to in that earlier post, but I want to add that the years since I wrote that post haven’t exactly been easy ones.  It is a sign of my sister’s grace that she came through these past few difficult years of loss and and reflection with that grace intact; with her humour and spirit and twinkle.

She wears a lot of hats – wife, (step)mother, teacher, caregiver, friend.  The people in her life are lucky to have her, and to share their lives with her.  She has always been a touchstone for me; a quiet rock of strength, and a motherlode of silliness. I love her very much.

I am blessed with siblings who I can easily look up to; they are genuinely nice people, and I 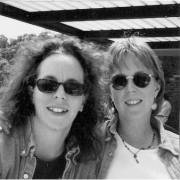 am so very glad that we have one another.

Go forth, and hug your sister today. I love you, Sis. Consider yourself hugged by me. Hope you have a Happy Birthday tomorrow,  and we will see you in the Spring.

I’ve been meaning to write about “Sister 761”, and have been sidetracked by Mr. 761’s leave from Afghanistan, and running around with him all over New England, NY, Ontario and Quebec. I’m actually a bit behind in recounting it all, and realize that I’ve been putting it off. I had made writing a daily activity, and it became almost a daily duty. I don’t want this… this, thing I call Box 761 to become a duty. It’s not some sort of dreary chore, and I don’t even think I want it to become a chronology of events (which happens, when you write it every day). I am, therefore, letting myself off the hook for writing daily, and am going to freely break the linearity I’ve been creating. 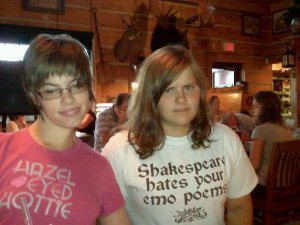 photo from last year, but a favorite of mine

It’s a beautiful day. My daughters are both home (from working away, and from university), and are actually spending time together. They’ve gone to the movies, with younger daughter driving,  and both spending their own money! I’m staying home, because I don’t want to see the movie they are going to see, and because I really wanted them to have time alone together.

There’s nothing like a sister. I like that this weekend has been throwing that theme at me. The other day, my niece wrote on Facebook that her younger sister was spending time with her for a few days in her university apartment, and I thought back to the times I went to visit my big sister, and how much I loved being there with her. They are some of my favorite memories.

They may not know it now, but our girls are making memories they will look back on and cherish. At the very least it will help them to create that critical mass of memory labeled “Sister” that they will carry within them throughout their lives. 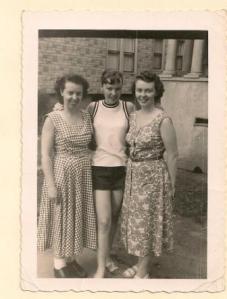 Our glamorous mother (center) with her sisters

I remember the day I realized that my sister and I would probably never live in the same place as one another again. It was traumatic, really. I guess I just hadn’t figured it out before then. I remember traveling on the train alone to meet her in Montreal, shopping, eating in restaurants, going to movies, talking. It was glorious, and gave me an idea of how great it was to be a “grown up”. To this day I still think St. Viateur bagels are the best, because she introduced me to them (and, well, they are). I remember going to a movie with her (I can’t even remember the movie, but it was an arty film in a rep cinema – dirty and dark and so thrilling) and the audience clapped… I was agog! They didn’t do that back in our hometown, and my sister found this place all on her own and was willing to introduce me to that world. Glorious. Even now — the last time she visited, we giggled for quite a while over the overly pretentious waiter who took us for rubes (little knowing that we were the kind of people who once were in a movie theater where they clapped. Sigh, how could he know?)… Nothing earth shattering, but small moments that we, and only we out of everyone in the entire world, share.

That’s why I remember now the times we had together with so much pleasure, and  that’s why I love that my daughters (and hers) are out together tonight. It’s not just a movie, it’s being together in a way that even bff’s from way back can’t be. To be a sister is something different – you shape one another, and share earliest memories and family. They are probably the closest thing in the world to having a twin, in some ways.

I’m the younger sister, so my role had been set since birth. When we played school I was always the student, she the teacher. Funny how we still have those roles, in some ways. She actually is a teacher, and I’ve been known to be sad in September if I’m not starting school. I am sort of jealous of my kids and their school supplies (oh! the fresh clean paper! The new pens and pencils, and don’t even get me started on geometry sets or  pencil crayons!), and I think back with fondness on every single September-new-beginning of my entire life (to add it up: kindergarten + 13 years of public/high school + BA + MA + Diploma= 21 glorious First Days of School). Much of that is with Many Thanks to my sister, who made learning fun, who let me read her books, who set a good example, and who always rewarded me if I got the answer right (okay, it was sometimes with ages-old Halloween candy, but a reward nonetheless).

I don’t know if I can actually account for the many ways that she has shaped me. Some are big, some small, some were ways that I had to tinker with it later on so it fit, but they were all important. It’s important when you have someone in your life who you know is looking out for you, and who will understand what you say, no matter what sort of language you say it in. She’ll get your jokes, remember you from before you remember yourself (!), and will always be something other than/better than a bff.

My own sister was a sort of mother-sister, those sorts of lines being blurred in my family sometimes. That made me, for many years, identify as a daughter-sister — a good thing, but always someone seeking help, rather than offering it. It took me a long time to make the jump from that — perhaps when our mother died, and then I had children of my own, that role fell away for good.

She was always more adventurous, more glamorous (that hair! So beautiful), more knowledgeable, more tender than I. She made a space for me to be feisty, and silly, and spoiled. As I grew and moved into my life, she was my cheerleader and friend. I couldn’t ask for better. I thank her for that, and hope that she feels that I’ve returned these gifts.

We live 4400 kilometers (2700 miles) away from one another, but got engaged on the same day, both to men with two daughters. We got married 3 weeks apart, and seem to have weirdly connected lives. Sort of freaky, even more great. We both just celebrated our anniversaries and although I loved my wedding (and hers!) I kind of wish we’d gone with my (only half-joking) suggestion that we have a joint wedding in Niagara Falls — as ticky-tacky as can be (can you hold a reception at the wax museum? ha ha ha!!).

We don’t always get along, and I probably drive her nuts, and our lives are hectic (and 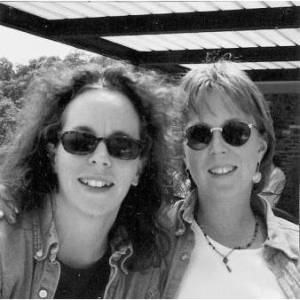 oddly parallel in many ways) and it’s harder to see one another because we’re far away. It’s harder to talk to one another, and to really connect as much as we used to. What I hope is that as time passes, and our own daughters leave us to go into the world, we will rediscover that sisterhood. I’ll have time to go there and spend time with her…. talking time, laughing time, junk shopping, novel reading, sitting on the porch time. Just, as with my own kids, being with one another.

I’m glad that her girls are building memories this weekend, and I’m glad mine are too. I do wish that she and I were also together this weekend, but writing this will have to suffice for the moment.

I think I’ll call her tomorrow.

This is kind of hilarious. My girls, about whom I’d so rhapsodically written this evening, just came in and told me they’d had a great time at the movie, but fought all the way  home. Ha ha ha! Nothing like reality to intrude on my waxing poetic.

Regardless, they seem to still be friends, and they’ll always be sisters no matter what.